Nana Wiki
Register
Don't have an account?
Sign In
Advertisement
in: A to Z, Albums, Music, Manga

"Hey listen up! All these musicians who love Nana came together, regardless of the contractual agreements with their record labels"
—Misato telling Nobu about the album.[src]

Love for Nana, also known as Love for NANA ~Only 1 Tribute~, is a tribute album released by Sony Music Entertainment [1] on March 16, 2005. It was released in both limited and regular edition.

Many major label artists performed for the album against the agreements on their contracts. Glen Matlock of the Sex Pistols also, provided a song for the album with The Philistines, and Holly Cook.

Love for Nana was promoted by Ai Yazawa in the bonus pages of volume 12. She has Misato Uehara along with Nobu Terashima hype up the album.

Tetsu69's "REVERSE" is also used for the background music of the Nana video game. 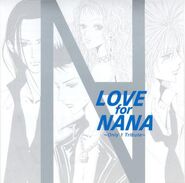 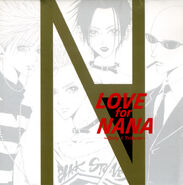